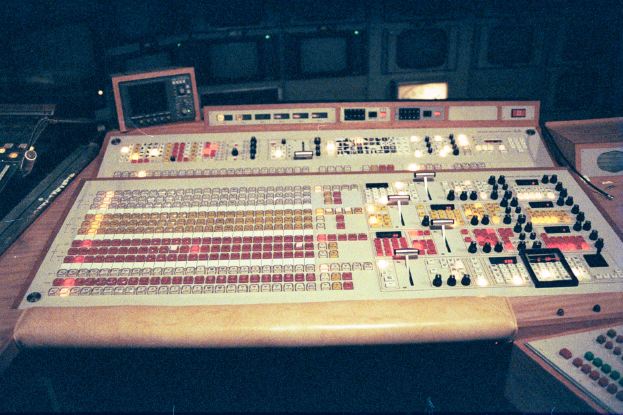 Thinking about the necessity of preservation.

There are lots of things in the world that need to be preserved. My focus happens to be old TV shows, specifically (and unsurprisingly to the reader) game/quiz shows.

I recently started streaming hand-picked old game shows on my Twitch channel. It’s a weekly affair on Monday nights for the moment and it seems to have a very sparse, devoted following for the moment. So far I have had a good time showcasing some of the rarer stuff in my collection.

I sometimes ask myself, “How important is it to preserve and showcase these things?” The best answer I can come up with is that these items are solid entertainment from a time when TV was an easier thing on the eye.

In my opinion, the modern way shows are done is too polished. The rise of non-linear editing has taken some of the charm of a live-to-tape show away that was a drawing factor in some of these shows. This is exactly why I sparsely used non-linear editing tools when doing Clue Me In in college. Polishing the show to a perfect thing kind of makes it a non-organic thing that doesn’t quite seem like what it should be.

Bringing a show in on time and rolling with the punches while the show is in performance was an innate skill. That is what should have been preserved.

I was thinking to myself, what do I think of the summer game shows currently on broadcast television.  You may be surprised at my thoughts.

While I don’t care much for the question material on the current versions of Family Feud, hosted by Steve Harvey, there are still plenty of laugh out loud moments to make it somewhat tolerable… at times.  The problem with celebrities of today is that I’ve never heard of some of them, and some of those people are… let’s see, how do I put this… not altogether there.  (Note to self: don’t be so denigrating, celebrities are people too.)

Now *this* is an awesome show.  When I heard that Michael Strahan was going to be the host, my initial reaction was one of skepticism.  He did have a good run with Kelly Ripa on Live and was very popular with the audience of that show.   I was very impressed to hear in interviews that in preparing for the show, he went back and watched episodes of the Dick Clark version on YouTube.  Read this article from the New York Post and you’ll see why I think he’s a great addition to a new breed of host that I enjoy watching.  The winner’s circle has brought lots of excitement to this version as in any other.  It still remains my favorite bonus round/end game of all time of any game show, without question.  It’s fun to see people master the art of this round.  And one more thing…. That set.  It’s so freaking beautiful.  A great update to the classic look.  This is how a modern game show set should be done.

Gene Rayburn once said that Match Game has a weak format.  That is true.  What drives this game is the insane laughter and goings-on in between the answers.  When I heard Alec Baldwin was going to host this one, my thought at the time was, “Huh?”  Then, that quickly became, “Either this will work or it will utterly fail.”  I think it’s safe to say it was the former.  While the question writing and the stacking of said questions (such as having gimme questions in Round 1 instead of Round 2) leaves a lot to be desired, the laughs and the mixture of celebrities are working out very good.  There are still some celebrities here that I have to Google, or ask Greg, to figure out who they are.  There are other little nit-picky presentation problems that I’ve come to expect out of Fremantle Media revivals.

To Tell the Truth (ABC)

Now this show I wasn’t so crazy about.  The game play wasn’t altered that much from what we would expect from years past.  The execution was very, very lacking.  Do we need a house band on a panel show?  Do we need the host’s mother keeping score for no reason?  Do we need Twitter shame just because you were the worst panelist at trying to figure out who was lying on purpose?  I find myself asking too many questions about these elements of this show to enjoy it.  At least they tried, but I don’t see this one coming back, especially when you consider they taped the shows about a full year before they even aired.  Back burners do not a renewal make.

So, that’s my thoughts on this summer’s shows.  Will we see more Feud, Pyramid and Match Game?  Time will tell.  I’ll try to review more new shows and not-so-new shows in the future.

EDIT: Right after I published this post, word came down on the ABC summer press tour that all four of these shows have been renewed, presumably for next summer.  (Source for the Truth renewal was the ABC press site.)

Just hop on iTunes and search for “Clue Me In”… there are 15 episodes of mine and Greg’s game show for campus television there. Now that’s how a game show should be done.

You’ll feel better in the end, trust me.

And, tell me this, should I share this with the Invision board, possibly?

The world as we know it, is over.

OK… I have officially had it with The Price is Right.

Someone tried to bid $2 million in contestant’s row this morning. That’s right, $2 million on a one-bid item. I don’t know what Stan Blits thinks he’s doing, but he needs to go back to selecting music. He’s not worthy of co-producer. I have transformed in one show from a back seat critic to a harsh critic. How does this staff pick such ludicrous and moronic contestants?

I think I’ll cleanse myself of this by watching some old episodes on tape… (pops one in) ahhh, feel much much better.

Jay Wolpert, where are you when we need you?

Well, “Clue Me In” has wrapped production for Season Two. I can honestly say that it’s been fun this year, we had a hard working crew and the show turned out well. Now, there is a dilemma: who will be the new host of the program? Christian, our host, is graduating and moving on. We have to find a replacement and pronto so that we can start working with said individual to get them up to speed on the game.

Just when you think you’re doing good… you have new challenges. That’s what’s life all about, my friends. 🙂

Well, time for an update, I suppose…

My fantasy team is 3-0, and I’m quite suprised, to be quite honest. I didn’t think I was going to pull out a win last week, but truth be told, I shouldn’t ever give up in the fantasy football world.

Season Two of “Clue Me In” is going well, we have two shows taped. The first of those is edited and in the can, ready to go on the air. The second will be edited next Monday, along with two thirty second promos to drop into other shows on campus cable promoting the new season and after the season starts. Still have to get flyers out and get some radio spots for “The Edge” (our campus radio station). It’s all about advertising… if they don’t know you’re there, they won’t watch you, plain and simple.

My directing still needs some work, but I’m doing a lot better on being my own technical director than I was on last season’s shows. There is always room for improvement. At least we had all our contestants show up today as they promised, no standing up! Things can only go up from here… just four more taping dates to go and the season is wrapped, with hopefully a total of eight shows in the can. I consider that a modest success, if it does happen.

Well, not much else to say, school is same as usual, and the love of my life is sweeter than ever. 🙂

OK… so this new show on CBS, Power of 10, is interesting.

It’s simple, dramatic, and has a lot of money riding on it. If there is one thing it has going for it, it is that you can root for these contestants as opposed to the crap fest that Deal or no Deal has always been.

Bob Stewart always said that if people at home were shouting at their television sets, you know you had a good game. I was yelling and screaming.

I will be watching next Wednesday at 8:00 PM Eastern/7:00 Central Time.

For those of you that like video… there are now clips on the Clue Me In website showing how the game works.

OK, for those of you who have been reading about my game show, “Clue Me In”, here is your chance to read about it!

About “Clue Me In”

You can listen to an open there, too.

If only I could get this darn capture card to work properly, I might try to put clips up somewhere.

Opinions are appreciated, of course.