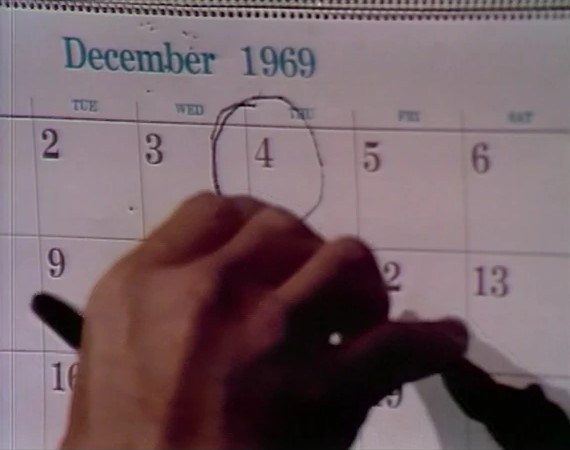 As we continue this journey into this dark mystery we actually start to get some really good performances this week. Here are my very brief thoughts on this week’s episodes. Remember of course that we are still one episode behind due to the unplanned preemption back on November 24th.

David is still mucking around with that book, hiding it in a puzzle box that has been spray painted to remove the brand names. Evil Barnabas somehow finds out… or rather is clued in to the fact that David has the book.

Also, the baby is now ill. I know these are evil spirits and all but it astounds me that a being who was just created out of thin air can also be just as susceptible to normal human ailments. Greg offered a thought whilst I was writing this that the fever was related to the book being missing, however it was very poorly explained in the plot. I think this a very good explanation as to why I am confused… probably along with the majority of the audience in 1969.

Barnabas takes Philip to the Leviathan altar to try to knock sense into him, more or less.

Marie Wallace excels at characters who are very unnerved, and poor Megan Todd is just getting started. Behold some great acting!

Dr. Hoffman to the rescue — maybe. One important thing that she is meant to see here is a strange birthmark on the baby. Megan of course doesn’t want her to see the baby. It’s like the evil spirits know who she is all too well, don’t they?

David wants to burn the book. Amy Jennings tries to talk him out of it… but the book, or someone, has other plans. It just happens to open to that freaking Naga symbol!

He reads the book and understands it. He’s come a long way from that crystal ball he had back in the early days of the show, hasn’t he?

Now we come to a scene that I thought was good and bad all at the same time. Julia is supposed to meet a Mr. Corey. To her surprise, it’s not a Mr., but a lady, Olivia Corey. After a few awkward lines back and forth about each other’s interest in Tate paintings I think the viewer is convinced that this should really be the modern version of Amanda Harris from the 1897 storyline. (If you didn’t add 2+2 to equal 4 immediately, you probably shouldn’t be watching this show at all.)

My apologies if the end of that last paragraph seemed a bit condescending, please don’t think it too harsh.

So, David is a Leviathan now. I am not shocked the writers are doing this with his character. I mean, a kid who took a bleeder valve off his car trying to off his own father of course is going to become a Leviathan!

Now, this episode has it all for me. Multiple characters and that great level of spooky that only Dark Shadows could do well.

Let’s start with Chris being visited by Crazy Jenny. Marie Wallace is on record as having said that Jenny was her favorite character that she played on the show. You can tell here that she was loving every scene-chewing moment.

To that fact, the Chris Jennings story, continued from before the 1897 flashback, is still the best thing the show has going right now. Admittedly it’s being treated as a kind of B plot with the Leviathans around, but still…

Barnabas has Philip in the secret room brainwashing him with a Barnabas speech on tape. This is the best tape recorder gimmick since Dr. Lang!

The end of the show is a testament to the creepy factor that Dark Shadows could only do so well. Just go and watch the whole end of Act III with Megan constantly being frightened by things in the antique shop. The lack of music, or any regular sounds for that matter, is what makes this scene. I know, there is a studio light visible here and there, but that is always the charming and endearing this about this show.

Oh, and watch out for the stagehand at the beginning of the credits pouring more dry ice into the cauldron.

Before I summarize this episode it is important to point out that we are one day behind on the intended airdates. The unplanned preemption on Monday November 24th will not be made up until January. The reason I point that out will become very obvious.

Julia decides to hold a seance to try and contact Quentin. I don’t understand why she asks David to be a part of it. I know that David had his beef with the ghost of Quentin months ago, but why would Dr. Hoffman want to put him in that kind of danger again? It just doesn’t click with me.

Now, here is why I pointed out that date above. Paul Stoddard inexplicably picks up a pen and circles a day on the calendar…

That’s right, December 4th! Keep in mind that this episode was originally supposed to air on December 3rd. OK, back to the seance.

Jamison Collins speaks through David at the seance and tells everyone that Quentin cannot be reached. It’s one of the shorter seances on the show and definitely the calmest.

Paul gets a letter from Megan at the antique store…

Great, another reminder of the airdate that should have been, lol. Maybe Paul should have paid? (I know, obvious statement.) But, look, he’s got a new tattoo!

The inevitable confrontation between Paul and Elizabeth finally happens in this show. It’s time to play the Family Feud… 7 years before it debuted on ABC! The scene here was very well written. However, the dialouge and the emotions were so hot and heavy that we have quite a few line flubs and desperate looks for a teleprompter. Again, that is the charming aspect of the production method of live-to-tape that I love so much.

Later, we are at the Blue Whale with a tune of varying pitch on the jukebox. Paul meets this day player Sailor. Greg instantly recognized the actor, Ken McMillan. He is more well known for playing the minister in the famous Chuckles the Clown episode of “The Mary Tyler Moore Show.” However, this plot is no laughing matter at all.

So this sailor has told Paul to draw a huge pentagram on the floor of his room and sit in it to be protected from the Leviathans. We’ll see if this will work… or will Dark Shadows not play by the rules of evil doings. Anything is possible! We end with a knock on the door and a turn of the doorknob. This Thursday cliffhanger sure makes a good Friday cliffhanger as well!

Overall, I think we are moving very good with some good elements of the storyline. However, I can’t help thinking that the viewer is still confused as heck over just who and what the Leviathans are and what they mean to do.