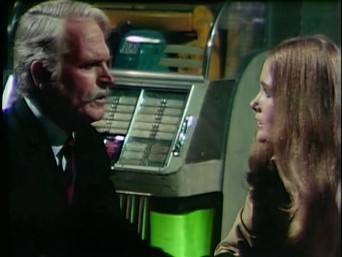 Dark Shadows was preempted for ABC coverage of the Apollo 12 splashdown. Coverage was slated to run from 3:30-5:30pm Eastern time. The splashdown occurred at 3:58pm Eastern Time. I am guessing that this preemption was not planned for because for the next several weeks the episode numbers will be off by one. More on this in a later article.

Are we surprised that the Todds were at the door? I wasn’t the first time I saw this plot in the late 90’s on the SciFi Channel. And oh my, what a charming locket indeed.

So if the audience paid attention to the closing credits last week they already know this mysterious guy hanging around Collinsport is Paul Stoddard. Guess nobody thought to keep the surprise a secret, did they? He calls Collinwood, asks Maggie Evans for Elizabeth, then hangs up. Looks like a standard soap plot to me at this point.

Barnabas decides to give the Leviathan box to the Todds. Just you wait until you see what you bargained for!

Paul Stoddard shows up at an empty Evans cottage and talks to Maggie about what is going on at Collinwood. This is a really creepy scene to me because he keeps dodging questions about who he is. It’s also sad because this is the last time we see the Evans cottage set in the whole series. It’s one of the original sets from the earliest days of the show’s life (it first appeared way back in Episode 3.)

Back to the Antique Shop and everybody is stepping over each other’s lines! That is part of the charm of this show.

So would you do what the Todds do at the end of this episode? Want to open a mysterious box so badly that you just happen to find the key in an envelope? Neither would I.

So there is a scroll inside the box with a mysterious message. The Todds naturally think its weird but then have a debate about having spaghetti for dinner for like the umpteenth night in a row. Such unusual dialogue for Dark Shadows!

Then Barnabas shows up in a dream of Megan Todd and says that the room she’s in must be prepared for something. I can just see all the Barnabas fans in the audience throwing things at their TV sets in protest of our favorite vampire being 150% evil now. Oh, and Phillip had the same dream and walks in with lumber to board up the windows.

Let’s be clear here, both Greg and me are sitting here watching this unfolding and thinking that the audience needs a lot more of a clear explanation as to why Barnabas has turned so so so evil. I think the plot background of the mysterious happenings at that altar are insufficient. Remember when I said miss an episode miss a lot? Oh people who haven’t been watching are way way behind now!

So there’s this cradle…

If I’m not mistaken, this was the same cradle one of Quentin’s children was in back in 1897. But now it will be the recipient of a child you don’t want to mess with.

So Maggie is in the Blue Whale with Carolyn trying to pressure her to have another drink and Paul Stoddard shows up again and decides to properly introduce himself at long last. If only his name wasn’t in the credits five episodes ago it might have been a bigger surprise!

Dark Shadows was again preempted, this time it was planned for the Thanksgiving holiday. Starting at 2pm that afternoon, ABC Sports carried coverage of a College Football game: Texas Tech at Arkansas. A very big matchup indeed since Arkansas was ranked #2 in the coaches poll at this time. Arkansas won the game 33-0.

So we end up with a really soapy scene in which we get lots of plot recap from way back in the summer of 1967. I don’t think a majority of the audience would have remembered the Jason McGuire blackmail plot going on during the early Barnabas days. It’s not a bad idea to get the audience up to speed on it.

I must say, why is Carolyn skeptical for only a brief second then all too trusting?

Unseen baby alert! The Todds have some kind of child now.

Another soapy scene at the front door of Collinwood. Who should be skulking about but David Collins himself, listening at the door. Guess his new lease on life is full of his usual garbage.

So the baby has a name now, Joseph, pulled out of thin air! And who else should come in but Amy Jennings and David and then Paul shows up. Paul is acting mighty weird and now it starts to connect a bit to all the other weird stuff going on already. On a side note, I am loving all of the mysterious cues from the first music cue package that haven’t been heard for a while on the show.

So David in his usual bumbling ways accidentally tore a page in the Leviathan book and then has to steal it. Only he didn’t have it in his hands in the previous scene when he was shooed out of the antique shop. I know, reader, I know, suspend your disbelief. But it is an egregious continuity error.

Megan goes evil/shocked/evil and vows to kill whomever stole the book. This leaves us with a Wednesday cliffhanger pushed back to Friday. I guess it works!?

So, we are one-ish weeks into the story. It’s moving pretty fast, but like I said, I feel some fans are left behind if they didn’t catch the first few episodes. I hate to be in ABC’s network correspondence during the month of December 1969.